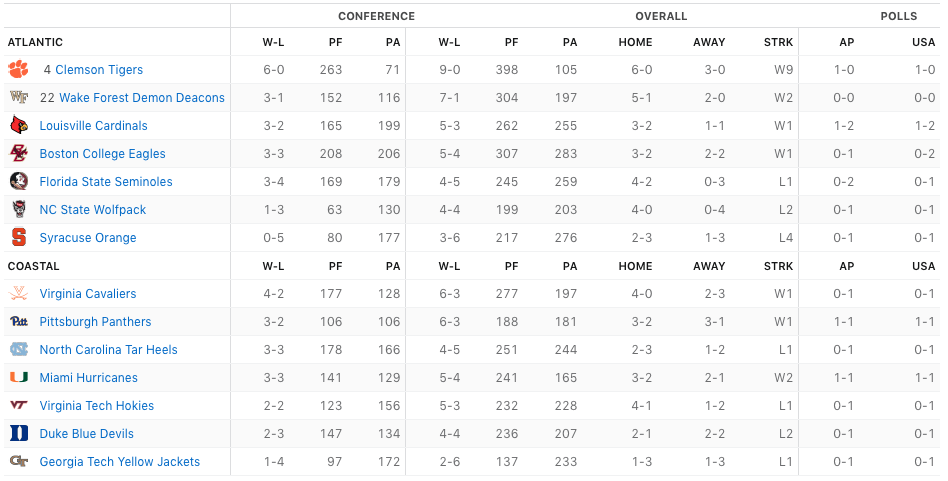 After a bit of a break, I return with some thoughts on this ridiculous conference as the season crosses into crunch time.

I spent much of Saturday consumed with my soon-to-be wife’s bridal shower. The part I attended was very nice, but it fell directly during peak football mid-afternoon. I elected to record the Virginia Tech-Notre Dame game to watch later on Hulu.

Avoiding spoilers went shockingly well–aided at least in part by being in a communications dead zone– and I managed to gin up enough self control to wait until I finished my watch shortly before midnight.

Hulu however apparently doesn’t allow you to fast forward through commercials on programs you’ve recorded. You have to pay an additional fee for this privilege. That made me far angrier than the incompetent officiating (#goacc) in the game itself or the place where we ate dinner which serves fancy stuff that isn’t actually food.

Even briefly rewinding to watch a replay on Hulu’s live service is often interrupted by 90 seconds of advertising. Not to mention their interface is a mess.

The game itself was pretty wild and overall an entertaining watch. I’ll be reevaluating my TV subscription though.

As for the football, Ian Book isn’t very good and I find the Irish fanbase’s concerns surrounding their offensive coordinator to be fair. They aren’t optimizing the wealth of talent they have. Book hung in there and scored on a nice run to win the game. He does a nice job extending plays, but struggles to see the field and needs to improve in his reads as a passer.

The Hokies are much closer to being a solid team than anyone expected a month ago. This is a sign of good coaching as the team has showed considerable improvement over the course of the season. Still, it’s tough to understand Bud Foster’s affinity for late-game prevent defense. That’s a tough one to justify outside of the final couple of plays.

Here are the highlights COMMERCIAL FREE.

Virginia now sits solely in first place in the Coastal Division, but give it ten minutes, spin the will of destiny, and that will change again.

Bryce Perkins is a special player and as he goes so does the fate of this season for the Cavaliers. 378 yards and three scores through the air, plus 112 yards and two more TDs on the ground is a stat line that North Carolina will not soon recover from.

Perkins single-handedly took over the game in a way that is decidedly uncommon. He’s not the best QB in school history but he may well be the most dynamic.

The stout defense has taken a step back the last two weeks due to injuries, but it won’t matter if they can keep scoring at this rate.

The only down side for UVA (6-3, 4-2) is that their only remaining obstacle is the Hokies, and they’re hitting stride just in time for the Commonwealth Cup clash. This year’s edition should be another barn burner.

All point values are made up and assigned by me. Mostly, I think it’s funny and a fitting way to track the general progress of all teams in this goofy conference.