Pat Narduzzi is sticking to his guns on one of the lamer coaching decisions in recent memory.

Trailing 17-10 on the road against No. 13 Penn State in the final scheduled game of a longstanding rivalry, Narduzzi elected to attempt a field goal from the 1-yard line. They missed, then failed to score at the end of the game after getting the ball one more time.

Uninspiring a choice though it may be, Narduzzi’s insistence that he was right to kick from the one has been utterly enjoyable. This is particularly true in the face of all evidence showing how wrong he was.

Pat Narduzzi on why he opted for a field goal with a fourth and one with five minutes left, down seven

‘Because you need two scores to win the football game.’

He added that he doesn’t question that decision ‘at all’

Narduzzi, whose 29-26 record at Pitt screams “mediocre” from the rooftops, seems to have forgotten that if they had scored six, a two-point conversion would be an option. At this point in his career it’s safe to say that Narduzzi is an average coach at best.

He’s done a good job rejuvenating the Pittsburgh program, but they’re a perpetual 7-5 squad under his watch. This latest mishap only further illuminates his shortcomings as a gameday coach.

Clemson Hums Along at Carrier Dome

The Tigers got another ragged performance from Trevor Lawrence who threw two interceptions Saturday, but also tossed three touchdowns and ran for another in a 41-6 rout.

It’s worth being a bit concerned about Lawrence, particularly when he’s challenged against bad defenses. The Orange currently rank 55th nationally in pass efficiency defense. Lawrence has tons of talent and countless weapons around him, but this is something to keep an eye on going forward.

We had to get one last look at the Carrier Dome while we’re still inflatable family.

The Orange aren’t very good this season which isn’t shocking given all they lost from last year’s team. Quarterback Tommy Devito took a step back after playing well in a loss to Maryland. He’ll have to step up for Syracuse to turn things around.

No. 25 Virginia will remain one of only two ACC teams in the national rankings after a 31-24 victory against the Seminoles.

If you just looked at the QB statlines you would probably assume the result was reversed. Jame Blackman threw for three scores without an interception while Bryce Perkins had two picks to just one TD.

“Our defensive heart and effort was magical. I won’t forget this one ever.”
-Bronco Mendenhall

The ‘Hoos got a classic goal line stand at the end of t he game to preserve  the seven-point win at home. It’s a nice win against a clearly talented but poorly-coached FSU team. The Seminoles have huge hole to climb out of against a very game Louisville team next week.

UVA has the dreaded look-ahead next week against Old Dominion before a tilt with No. 7 Notre Dame. Things are getting very interesting in Charlottesville. 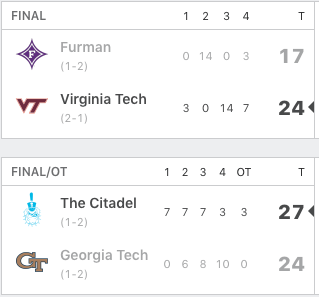 It was not a strong weekend for the Tech’s.

Georgia Tech dropped an overtime game at home to a lower division foe and the Hokies needed a penalty on an onside kick to scrape out a win against a similar opponent in Furman. That game was at home too.

The Yellow Jackets were expected to be bad but perhaps not, “Lose to a lower-division military academy” bad. It’s an early setback, but this season was always going to be ugly. Progress as the season continues is what you need to watch for with Geoff Collins.

The Hokies are another matter. They appear to have found a rising star in freshman running back Keshawn King (12 carries, 119 yards), but the offense continued to sputter to just 350 total yards. Justin Fuente continues to search for answers to fix the No. 76 total offense in the land.

Elsewhere, Boston College has some questions after getting thumped at home by Kansas. Wake Forest is legit, but the ACC officials are not off to a good start. NC State has been humbled, Duke is probably better than folks expected, Carolina is a contender. Everything in the state of North Carolina is a bit screwy.

That’s life in the ACC.