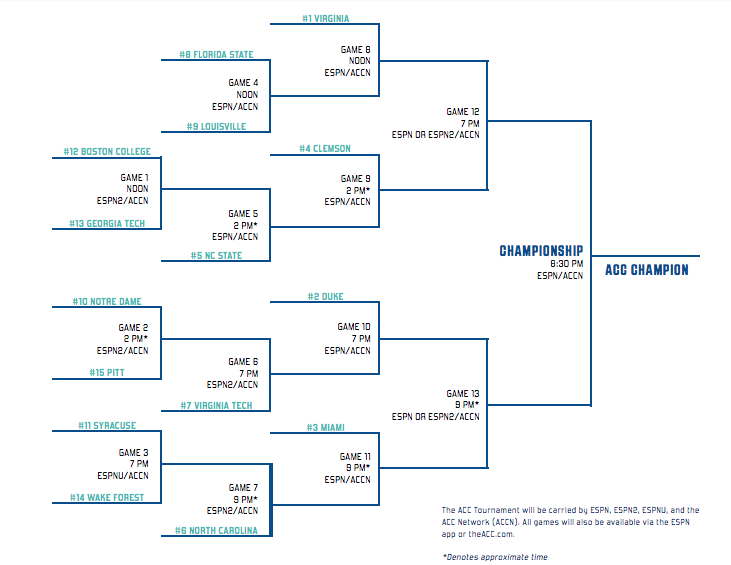 The 65th annual ACC men’s basketball tournament begins Tuesday at noon at Barclay’s Center in Brooklyn, NY. It marks the second consecutive season the tournament will take place there.

The Virginia Cavaliers (28-2, 17-1) are once again the top-seeded team and will look to solidify a top seed in the NCAA Tournament. The Wahoos are joined by Duke, Miami, and Clemson as the top four seeds in the ACC Tournament thus giving them all the coveted double-bye and an automatic spot in the quarterfinals.

NC State, Virginia Tech, and North Carolina all earned single-byes by virtue of finishing in the top seven of the conference standings and will face the winners of Tuesday’s first-round games.

In addition to giving those top seven teams that have likely already earned a spot in the NCAA Tournament a chance to improve their seeding, the ACC Tournament will give bubble squads like Syracuse (19-12, 8-10), Notre Dame (18-13, 8-10), and Louisville (19-10, 9-9) a chance to squeak into the big dance with a last-minute resume boost.

The conference title game is scheduled for an 8:30 p.m. telecast Saturday night on ESPN.

All ACC Tournament games will be broadcast on ESPN, ESPN2, ESPNU and the ACC Network.