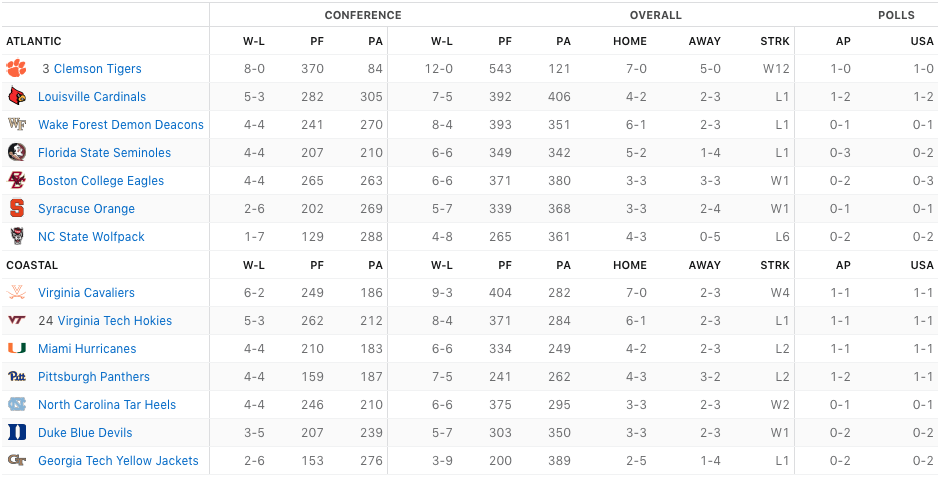 Ding dong the streak is dead.

The Virginia Cavaliers finally defeated the rival Hokies 39-30 in an exciting game that featured one half of stout defense and one half of electric offense. The Commonwealth Cup returns to Charlottesville for the first time since 2003 and the celebration likely still hasn’t ended for Wahoos across the land.

Bryce Perkins took the game over as he so often does and broke things open early. Perkins broke free on touchdown runs of 39 and 65 yards early and finished with 164 yards on 19 carries. He added 311 yards, a touchdown and a pick through the air.

His counterpart Hendon Hooker had a strong day as well matching the 311 yards in the air with a touchdown, and two interceptions, though one came on a hail mary at the end of the first half. It’s a shame Perkins is a senior because these two could have had a number of classic battles in the coming years but it’s not to be.

The Cavaliers (9-3, 6-2) became the seventh team in seven seasons to win the ACC Coastal division, completely to most Coastal Chaos outcome possible. #goacc

Virginia is the 7th different team to win the Coastal in the last 7 seasons. pic.twitter.com/WXTZnCxeKc

The ‘Hoos will face Clemson Dec. 7 at 7:30 pm in Charlotte. The Tigers are the defending national champions and will ride a 27-game winning streak into the match up. Anything can happen to be sure, but this will be a tall order for Bronco Mendenhall’s excellent team.

It’s that time of year where staff changes are going to rapidly start happening all over. Everyone knows Florida State is in the market for a new head coach and they won’t be the only program looking.

Steve Addazio is out at BC after a 6-6 season. The program was perpetually a 7-6 club under his watch, finishing with that record four times and finishing 7-5 last season when their bowl game being cancelled prevented a potential fifth occurrence.

His 44-44 overall record and 22-34 ACC record should give pause to the next coach in the discussion.

NC State can probably stand to ask some questions of Dave Doeren after a disappointing campaign. One bad season on the heels of five consecutive bowl appearances probably won’t end his tenure, but he may need to shake up his staff. His 47-42 overall record at State featuring a 21-35 mark in ACC play doesn’t help matters.

On the Coastal side, I think there are a number of programs that will shake up their staffs.

Virginia Tech, Miami, and Pittsburgh will likely all make some changes. The Hokies knew they had to replace their defensive coordinator with the retirement of Bud Foster. Rumors have been swirling about the offensive side of things as well. Time will tell if there’s any merit there but a new defensive staff will be the minimum.

Miami and Pitt both underachieved with each team cratering down the stretch. These offenses need a reboot. Manny Diaz is already on the hot seat based on the brutal offensive drop off this season. He’ll get another season, but there is already concern over that hire. It’s simply poisonous to fire someone after one season. Who on Earth would take a job like that who’s worth getting? Certainly not an upgrade.

There are 130 teams at the top level of college football.

KJ Osborn is gone and Deejay Dallas may go.

Plenty of Pitt fans feel the program has topped out under Pat Narduzzi. He has made a bowl game in four of his five seasons now, but the record looks eerily similar to Steve Addazio’s with a few more W’s.

While the defense has been strong, he’d be well served to find improvements on offense. Another seven or eight win season may well be the last unless Pitt leadership decides that’s the program ceiling. Something tells me they won’t.

Manny Diaz looks like a North Pole whistleblower reading a prepared statement to the media about years of ignored OSHA violations pic.twitter.com/8qGoVdUaRM