There could not be more variation in conference expectations for the 2018 season, but it’s worth handicapping anyway to the best of our ability. Half of the fun in covering college football is trying to figure out the unknowns–and boy, are there a lot of them in this year’s ACC.

I have said it on multiple platforms and I’ll say it here again: there are at least six-to-eight teams in the conference this season that look like five-to-eight win football teams. That is a TON of variation that speaks more to the depth of the ACC than anything else. There are going to be several good football teams in the conference this year that may be scratching and clawing to make a bowl game–that’s how deep this ACC could be in 2018.

In fact, I think 11 ACC teams could end up making a bowl game in 2018. It’s certainly a high number that may not come to fruition, but I feel like it’s a decent guess after going through each team’s individual schedule. In reality, anything between 8-10 bowl teams seems to be a pretty safe number, while 11 is probably the ceiling.

I preview conference standings, the ACC champion, and a whole lot more in this preview, so let’s get to it:

Let’s start with this…

I have no idea what is actually going to happen in the ACC this year, outside of Clemson. The Tigers are far and away the most talented team in the ACC, and it’s not particularly close.

That’s not to say that Clemson can’t lose a game, they will almost assuredly drop one somewhere–they always do. The Tigers lost to Syracuse on a Friday night in the Carrier Dome last year, in one of the single biggest upsets of the season. Beyond that, think back to their National Championship season in 2016. They were upset at home against Pittsburgh and were a shanked field goal away from losing to NC State as well. That’s how small the margin for error can be in college football. As Bill Connelly of SB Nation always says, “we’re dealing with a bunch of 18 to 22 year-olds and an odd-shaped ball, almost anything can happen.” With that being said, I won’t be the one picking against the Tigers in 2018.

The Miami Hurricanes are the wild card in this whole thing. To me, it’s Clemson, Miami, and everyone else. The Hurricanes have the talent to go 11-1 or 12-0, but quarterback remains a massive question mark for them. Malik Rosier has been fine, but his inconsistency certainly limits their ceiling. However, the talent that the ‘Canes boast at nearly every other position should be plenty enough to get them back to Charlotte for the ACC Championship. The chances that they compete with Clemson in the conference title game and avoid a blowout loss again rest solely on the shoulders of Rosier. I’m not sure how much he will improve, if at all, but the ‘Canes were lucky to win 10 last year given his inconsistency. I have them with two losses, both in conference play, and would not be surprised in the slightest if they are because Malik Rosier has a bad game (or two).

ACC Offensive Player of the Year

I thought long and hard about putting A.J. Dillon of Boston College here, because he could easily have a 1,500-2,000 yard rushing season for the upstart Eagles. However, because the wins may not mirror his true impact, his name could be overlooked for another ACC running back here.

Clemson could go undefeated, or at worst 11-1. The Tigers will need to have a consistent running game this season to aid whoever the quarterback may be, especially late in the season when I expect Clemson to be in position to compete for a national championship. Quarterback Kelly Bryant is getting first crack against Furman, but blue-chip true freshman Trevor Lawrence will certainly have his say at the position before season’s end. Regardless, the Tigers will need to be more consistent on the ground to avoid a dud like they had in the Sugar Bowl last season.

This all starts with Travis Etienne. The sophomore running back is the one ball-carrier with true game-breaking ability, which he showed in a pinch throughout his freshman campaign in 2017. Etienne rushed for 766 yards and 13 touchdowns as a freshman, averaging a robust 7.2 yards per rush. I expect Etienne to step into more of a featured role this season, and as such, could emerge as one of the top running backs in the country. The Tigers should be in contention all year long, and Etienne will be a major reason why.

ACC Defensive Player of the Year

Everyone, AND I MEAN EVERYONE, is talking about the Clemson defensive line heading into 2018, and rightfully so. The Tigers have four potential first round draft picks on their defensive line, and they are garnering all of the hype that they deserve. There is one defensive player in the ACC that has flown under the radar a bit, but has put up ridiculous numbers in his first two collegiate seasons.

That’s linebacker Joe Giles-Harris of Duke. The redshirt-junior is the best linebacker in the ACC, but he plays for Duke so nobody ever talks about him. As a redshirt-freshman in 2016, he burst onto the scene in the ACC, recording 107 total tackles, including 9.5 for loss…pretty impressive. Last season, as a redshirt-sophomore, he was even better, recording 125 total tackles and 16 for a loss. That’s 232 total tackles, and 25.5 for loss in just two seasons, TWO SEASONS.

He’s ridiculous, and gives you plenty of reason to tune into a random Duke game at 12:30 on a Saturday. Keep an eye on him in what should be another productive year in 2018.

ACC Coach of the Year

The Seminoles enter 2018 with a boatload of talent, but a ton of question marks. The main question remains as to whether or not Willie Taggart can get the most out of the talent in year one in Tallahassee. I happen to think that he will, even in year one.

Keep an eye out for Florida State, especially when they take on Clemson at home on October 27th. They are the one team on the Tigers’ schedule that has a great chance to pull up off an upset with the talent that they boast. If they pick up a win there and find a way to get to 10 wins, it would be hard to envision any other coach in the conference winning this award.

However, if Clemson goes 12-0, we know where this award is going…and Dabo will deserve it.

Akers had a phenomenal year as a freshman in 2017 for Florida State, rushing for 1,025 yards and seven touchdowns on the season, while averaging 5.3 yards per rush. Despite his 1,000+ yard season, Akers flew under the radar due to the down season for the Seminoles a year ago. Akers should be better with another year of development, and the Seminoles should be much, much better. With that, Akers will breakout in 2018 and garner all of the hype that he truly deserves.

ACC Comeback Player of the Year

It’s pretty difficult to imagine this award going to anyone else. Francois suffered a torn patellar tendon in last year’s season opening loss against #1 Alabama, and the Seminoles were never the same, as they had to scratch and claw to reach bowl eligibility. Francois is back healthy and was named the starter over his replacement last season, James Blackman.

Many forget that Francois a popular bet to win the Heisman last season before the year began, so the talent is there for him to have a huge year in a quarterback-friendly Willie Taggart offense. If the Seminoles have a big year, Francois will be a major reason why.

There is not a player in the conference this season that is more pivotal to his team’s success than Miami senior quarterback Malik Rosier. In his first season as the starter a year ago, Rosier led the Hurricanes to a 10-0 start, but struggled at times throughout the winning streak. Rosier completed 54% of his passes a year ago for 3,120 yards and 26 touchdowns to 14 interceptions.

His flaws were no more apparent than in the season’s final three games (all losses), as Pittsburgh, Clemson, and Wisconsin exposed Rosier’s inability to be a real threat in the downfield passing game. In the 0-3 stretch to close the year, Rosier completed just 45% of his passes for 500 yards and three touchdowns to five interceptions. His 166 passing yards per game in this stretch caused a good Miami offense to go stagnant, and ultimately led to the demise of the Hurricanes.

For Miami to reach their goals of winning an ACC Championship and reaching a College Football Playoff, Malik Rosier must be better. He’s by far the most important player to watch in the conference this season.

In no particular order, these are a handful of names to watch this season in the ACC who could make a run at the Heisman Trophy. Admittedly, I think the ACC’s chances of having a Heisman winner this season are relatively low, given the top-tier talent outside of the conference.

Tua Tagovialoa (who by the way, hasn’t even officially been named the starting quarterback at Alabama) is the betting favorite in Vegas currently, but given the volume of carries they’ll receive, Stanford running back Bryce Love and Wisconsin running back Jonathan Taylor should both be major factors in what appears to be a pretty wide-open Heisman race this season.

Betting on a Heisman Trophy winner and feeling good about the outcome is a near-impossible task, but if the ACC can get a player to New York for the ceremony, it will be great exposure for a conference that should be competitive top-to-bottom in 2018.

Here are my personal picks for preseason All-ACC. Bookmark this, we’ll see how right (but actually wrong), I am at season’s end. 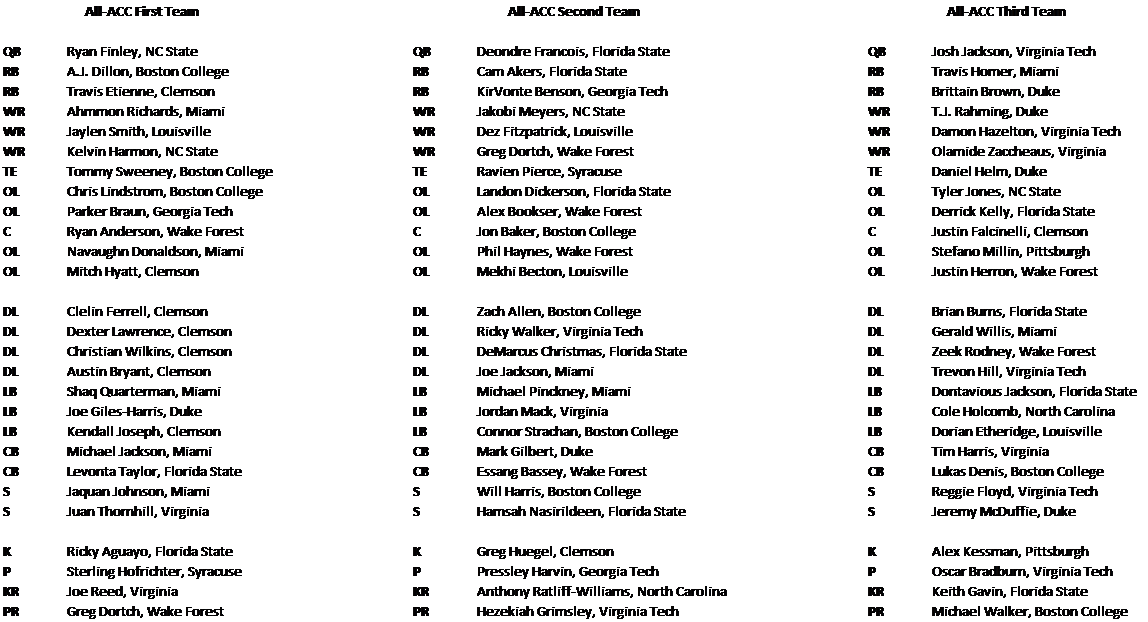 And a bonus…. THE PLAYOFF TEAMS:

These are the two most-talented and well-coached teams in the country, and I think if the last game of the year features anyone other than these two teams, we’ve been robbed. Many will say that they don’t want to see the same match-up for the third time in the last four years. My advice for those people, have your team go beat them.

Truth be told, if we get a fourth installment of Clemson and Alabama, it will be an absolute coin flip. Both teams are supremely talented and the rosters are built in eerily-similar fashion, but as an ACC writer, I’ll make the homer pick in this dog fight and will take the Tigers over the Crimson Tide to win the national championship.

Enjoy the season everybody.