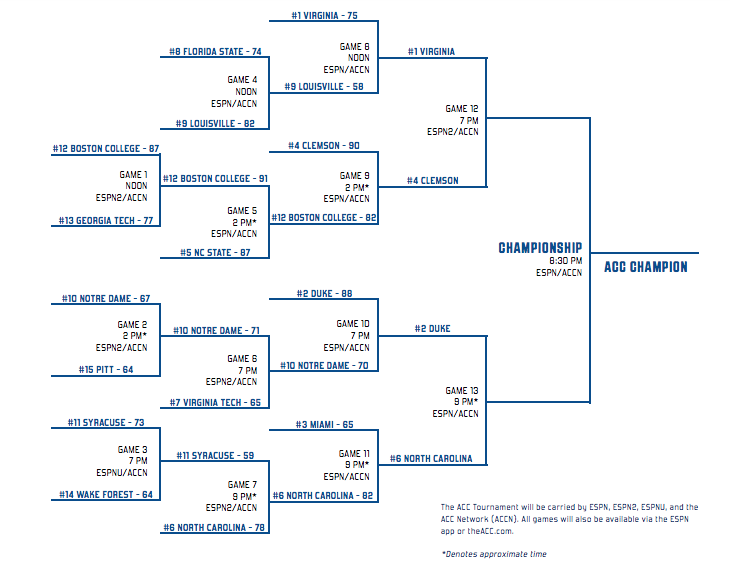 Despite some some fun upsets from Boston College, a noteworthy 21-point comeback by Notre Dame against Virginia Tech, and a major snowstorm in Brooklyn, the ACC semifinals come down to three of the top four seeds in the conference.

The first half of the semifinals features the slow-but-steady Cavaliers against a Clemson team that likes to mix it up and run if they can. That proved to be impossible during the only regular season meeting between these teams.

After being down 27-23 at halftime, Clemson was held to just 13 points in the second half. That lockdown Virginia defensive performance lead the ‘Hoos to a 61-36 victory over the then No. 18 Tigers.

Virginia forced Clemson into 19 turnovers and outscored the Tigers 25-8 off of them. Even more impressive is that much of the lockdown effort came without ACC Defensive Player of the Year Isaiah Wilkins who was banged up shortly before halftime.

Virginia cruised to a 75-58 win over Louisville Thursday behind 19 points and seven rebounds from Kyle Guy. The sophomore guard’s heroics came despite wearing a brace on his left knee. He sprained the knee in Virginia’s regular season finales against Notre dame.

Expect a closer game between these teams this time around, as Clemson has fully adjusted to playing without Donte Grantham. Still, the Cavaliers are going to be exceptionally difficult to beat.

As has so often been the case in ACC Tournaments over the years, we’re treated to part three of the Duke-North Carolina rivalry. Regardless of which team wins, it will mark the 22nd consecutive year that either the Tar Heels or Blue Devils will play in the conference title game.

It’s hard to find a lot of weaknesses with these teams as even when the usual suspects have an off night, someone else steps up.

That was on full display for North Carolina last night en route to an 82-65 win over four-seed and 24th-ranked Miami Thursday night. Joel Berry and Luke Maye combined to go 5-of-29 from the field and just 1-of-11 from three-point range. Enter Theo Pinson.

Pinson played the game of his life with a career-high 25 points, 11 rebounds, and three steals. He also broke Miami’s backs with a thunderous dunk late in regulation.

Note that the Hurricanes (22-9, 11-7) didn’t score the rest of the night. That slam sucked all the energy out of what had been a solid effort to that point.

They’ll certainly have their hands full with a highly motivated Duke squad fresh off an 88-70 win over Notre Dame.

Marvin Bagley III finished with 33 points and 17 rebounds in what was arguably the best game of his young career. Grayson Allen nailed his first five three-pointers and finished with 23 points while Trevon Duval added 11 assists.

The best Duke teams have always had exceptional point guard play. That’s not exactly rocket science, but it was a bit of a question mark earlier in the season when the team was struggling. Duval’s improvement down the stretch has turned this into a Final Four caliber team brimming with confidence.

These games should both be outstanding, and Duke-Carolina makes for an incredible Friday nightcap. Be sure to tune in to see the ACC fireworks in Brooklyn.