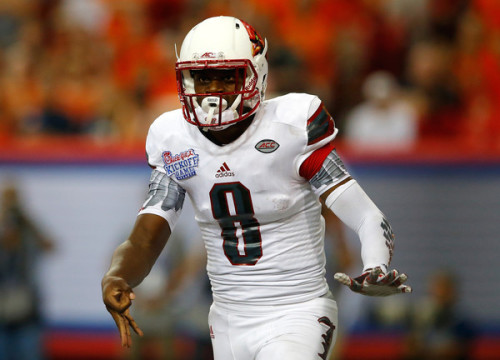 This week we discuss NASCAR, barbecue, and Pirates.

This is a big test for the Orange, particularly for their young defense. The Orange are currently ranked 6th in total defense and passing offense, but those numbers came against Colgate. Lamar Jackson is ready to go off yet again for the Cardinals and he has the potential to put up some early Heisman numbers in the Carrier Dome. Louisville can’t afford to look ahead to next week’s showdown with Florida State.

Boston College hasn’t lost to UMass since 1978, but this could be a tricky out. The Minutemen just gave Florida plenty of trouble in the Swamp, ultimately falling 24-7. BC needs to find some answers, some of which may have come in the second half against Georgia Tech. Patrick Towles needs to improve to get BC in the win column. Jon Hilliman had 102 yards on just 17 carries last week, most of which came on a 73-yards score. He needs to continue to be effective.

Pirate QB Philip Nelson is #1 in the Nation in Completion Percentage with an .875% after Game #1. pic.twitter.com/EqtQkodUwg

East Carolina has a five-game winning streak against ACC opponents since 2013. This is no joke for the Wolfpack and ECU already has a chip on their shoulder. “I believe that we get looked down on a lot just because we are ECU,” receiver Zay Jones said this week. That sentiment has served the program well and while State probably has more individual playmakers, I wouldn’t count out the Pirates at home. The Wolfpack needs big games from Matt Dayes and Jaylen Samuels.

The Keystone Classic will be very interesting indeed. Two exciting young coaches early in their tenures are trying to return football in Pennsylvania to the upper levels. Neither team was challenged in their openers so this one may be slow to get going. Look for Pitt to establish the run primarily while hoping for an improved effort from Nate Peterman.

Florida State gets a break after the tough opening weekend and before a tough trip to Louisville. This was already unlikely to be a terribly challenging game and that was before word of mass suspensions for Charleston Southern came out. Now the game has all the makings of a complete laugher. Deandre Francois won’t even get many meaningful reps in this one, but maybe Dalvin Cook can pad his stats a bit.

The Trojans walloped Austin Peay in their opener while Clemson scratched by Auburn on the road. Troy can move the ball a bit, but it will be much tougher against the Tigers. Troy ranks 33rd in total defense while Clemson rates 35th in total D after considerably different opening opponents. This game shouldn’t be much of a challenge for Clemson.

The Yellow Jackets are off to the early ACC lead with the win over BC in Dublin. That was crucial to getting over last season’s dismal results. Mercer lost a 24-23 heartbreaker to the Citadel last week to fall to 0-1 in a Southern Conference meeting. This is the Bears’ 4th year as a program under Bobby Lamb. Georgia Tech needs to get the offense churning again and this should be just the opponent to do it for Justin Thomas and the gang.

This man can MOVE.

An important early season conference game could be a huge upset for Wake or a business as usual win for Duke. The Blue Devils want to build on the early success of redshirt freshman quarterback Daniel Jones (189 yards, 2 TDs) and get Jela Duncan more yardage on top of his 115 in the first game. Wake has to do better on offense after scoring just seven points in a win over a Tulane team that might not be very good. Which QB can take the job outright for the Demon Deacons?

FAU is 1-0 after an exciting 38-30 win over Southern Illinois. Miami badly beat Florida A&M and they look to put a hurting on yet another overmatched small in-state school. The Canes are ranked now which will only amp up expectations in the coming weeks. Miami travels to Appalachian State September 17 which poses an interesting challenge. Brad Kaaya has to focus and take care of business. His trio of running backs dominated last week and may do so again.

UNC should still be feeling pretty good after a tough loss in the season opener against Georgia. Illinois took Murray State down 52-3 in a friendly opener. Mitch Trubisky has to be better at quarterback for the Tar Heels but he can lean on running backs T.J. Logan (80 yards, 1 TD) and Elijah Hood (72 yards). Ryan Switzer will likely continue to be a favorite target after posting a team-high 52 yards in the first game.

Tennessee took a few shots to the chin in the opener against a very game Appalachian State team. It was at home no less, and while there while be tons of Tennessee orange at this game — Tech fans in attendance are encouraged to wear maroon — this is technically a high-stakes neutral site affair against a new offense. The Hokies have a chance to win as long as they can cut down on turnovers and get the ball to Isaiah Ford.

Things don’t get any easier for UVA after a tough opening loss at home to Richmond. Oregon has holes on defense as is often the case, so if the ‘Hoos can slow down the Ducks and get a passing game going with Kurt Benkert (264 yards, 3 TDs) they stand a chance to keep this closer than people would expect. A win here win be very unexpected.